- September 03, 2012
So it has been a long time since I made a real post; but we won't dwell on it. Instead, let us get to the good stuff and share some information!

This post regards my long term rebuild of my Prusa Mendel Reprap, which I decided to do back in March. If you saw my previous blog posts, you will have seen the state of the printer. It worked, but it didn't print well and there were wires everywhere. I even used some CAT5 as motor wire.

Because of the setup, the printer experienced many problems:
So, I took the entire thing apart and took the following steps:
With the changes in place, the printer actually printed really well with no calibration. The controller computer was also updated; (1ghz/512MB -> Core i3 + 2GB). Going forward, I don't recommend hooking a reprap up to an older machine like that unless you are going to "slice" on a different machine. I consider the connectors to be a big upgrade, it should be easy to swap out, adjust and generally maintain all of the connections.

Here are a couple pictures: 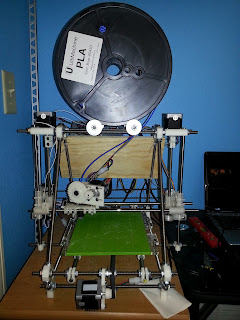 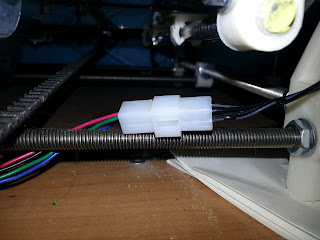 Well, that is the 3D printer post. I've been printing some Hexy parts to calibrate it; and I'm very happy. It prints better than it ever did before!

I have a post coming up with some code in it that is pretty exciting, and I'm continuing to experiment with the printer while waiting for my Hexy. Don't forget about my little tracked bot! A model is needed for the sensor mount to make the line following more smooth!

That is all for now!

Smith William said…
I was very encouraged to find this site. I wanted to thank you for this special read. I definitely savored every little bit of it and I have bookmarked you to check out new stuff you post.

Popular posts from this blog

First, here is the player we are discussing, or at least your average version: Although if you are here, you probably don't see the nice shiny interface above. That's a shame, but we'll try to fix it. This all started for me when a friend got a bag of crap from Woot! Among the loot, were quite a few dead Sansa e2XX players. You have to use the e200 tool to reflash them, it works better under Linux, and I run Linux (Ubuntu if you must know). So I ended up in a deal where I would try to fix all three. They were all fixed, and below I share how I eventually got all three working. There are many posts on the web about how to fix these. They involve going into factory mode and flashing the firmware. Unfortunately a measurable percentage of people find that to be completely useless because if you can't get the device into factory mode then you can't update the firmware. Let's troubleshoot a Sansa MP3 e2XX player. Keep following these steps, if you make it to t
Read more 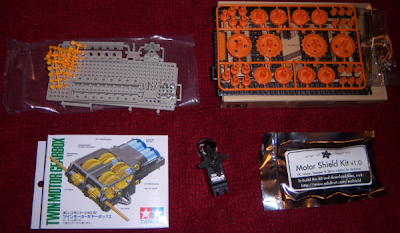 What you see below is the result of my first attempt at building a robot. The goal was to build something Arduino based. It would move forward, turn around, come back; and then turn around again to be in its original position. Finally, I wanted to try multiple part selling web sites, to get experience with who to buy from. Fortunately; they were all better than expected experiences. My Arduino was a Christmas present; but I will be factoring 32.00 into the cost of the project to account for it. The first phase was an order from SuperDroidRobots.com. Tank treads, a double motored gear box, and some plastic to build a chassis came in at $40.00. The second order was from Adafruit.com, for a continuous rotation servo and an Arduino Motor Shield. The Adafruit order also came in at $40.00. Subtracting the cost of the unused Servo, this robot is built for just under $100.00. You can see the initial parts order below. I started by building the motor shield, this is the motor shield kit wh
Read more

My second robot was a bit more complex and ended up taking twice as long to build as originally intended. The budget changed, the designed changed, and my understanding of Robotics in general changed. The second robot is an attempt to make an obstacle avoidance robot that isn't overly simple. I will be outlining the goals, budget, build and code for Wandering Tank. The goals for Wandering Tank were simple: Should be able to scan an area in front of itself. Should be able to avoid not only walls, but obstacles. Avoid random decision making; the robot should use information when avoiding. Wandering tank meets these goals, and also looks pretty cool doing it. The code for the robot will show how the third goal is met and the other two will be obvious in the video. The budget for Wandering Tank was quite cheap. Since I started with Robot 1, the only additional cost for Wandering was the sensor and the servo. Robot 1 ($98.00) Sensor - Digital Distance Sensor 10cm $6.95 + $2.00
Read more